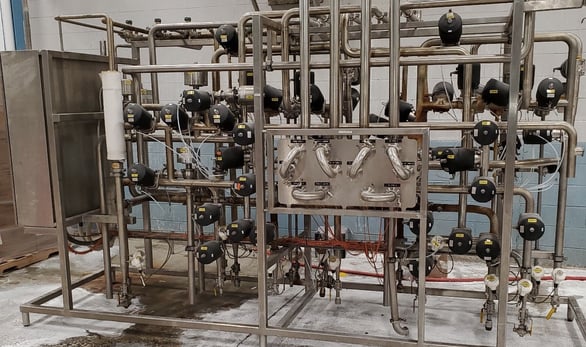 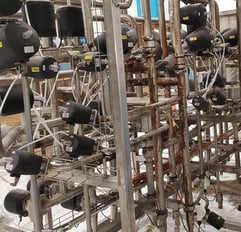 While cost savings were a main driver for utilizing used valves, quality was paramount for the success of the project. Each valve was inspected, cleaned, polished, and received a new aseptic diaphragm and air fittings. A small group of valves required additional inspection and polishing to ensure adequate operation and sealing. To reduce the risk to the project, these valves were sent to SED for additional analysis. All the valves sent out for analysis received additional polishing by SED and passed a valve seal test, removing the need to purchase replacement valve bodies and avoiding additional project costs.

Figure 3: Decommissioned Valves After Cleaning and Initial Polishing, Scratches on the Weirs

With the repurposed valves, JCS assembled two (2) dual barrier UltraBlocks™ and four (4) filler End of Line valve clusters; two of the End of Line valve clusters did not require piping modifications and were simply inspected and cleaned. This further reduced project costs by limiting the disassembly and welding costs for the two (2) EOL valve clusters. The decommissioned valves allowed JCS to trim six (6) weeks out of the delivered project scheduled. By reconditioning and repurposing the decommissioned valves, JCS was not only able to save upfront costs but also able to reduce the lead time of the overall project. 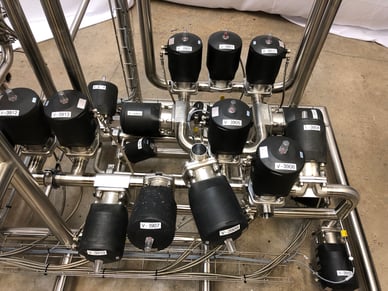 Tags:
beverageprocessing, asepticroutingcluster, asepticprocessing
Why convert an old PLC to a new PLC?
Data Management and ERP Integration in the Beverage Industry

View author's profile More posts from author
Project Manager – Shauna joined JCS in 2016 as a Field Service Engineer, moving to Project Management in 2018. She graduated from Rochester Institute of Technology with a BS in Mechanical Engineering and MS in Management, Product and Service Development. With over 10 years of engineering and field experience, Shauna uses that knowledge to manage multidisciplinary teams of engineers, fabricators, and contractors to execute projects that meet and exceed customer objectives while maintaining best practices and high quality standards.